Gone with the Wind (1939), the sweeping Civil War epic based on the Margaret Mitchell novel, is considered one of the best movies of all time for many reasons. Not only did it have a top notch cast and many iconic scenes, its costume design, sets and cinematography were second to none. However, it’s not a film without its controversies. Two of them, which you’re probably well aware of, are its romanticism of the antebellum South and its depiction of slavery.

On top of these issues, there is another less talked about yet no less controversial problem that has dogged the film all these years–the infamous grand staircase scene. In case you don’t know which one I’m talking about, it’s the scene in which Rhett Butler, drunk as a skunk, belligerently confronts Scarlett O’Hara about her undying love for Ashley Wilkes, then carries her up the iconic red-carpeted staircase to their bedroom. 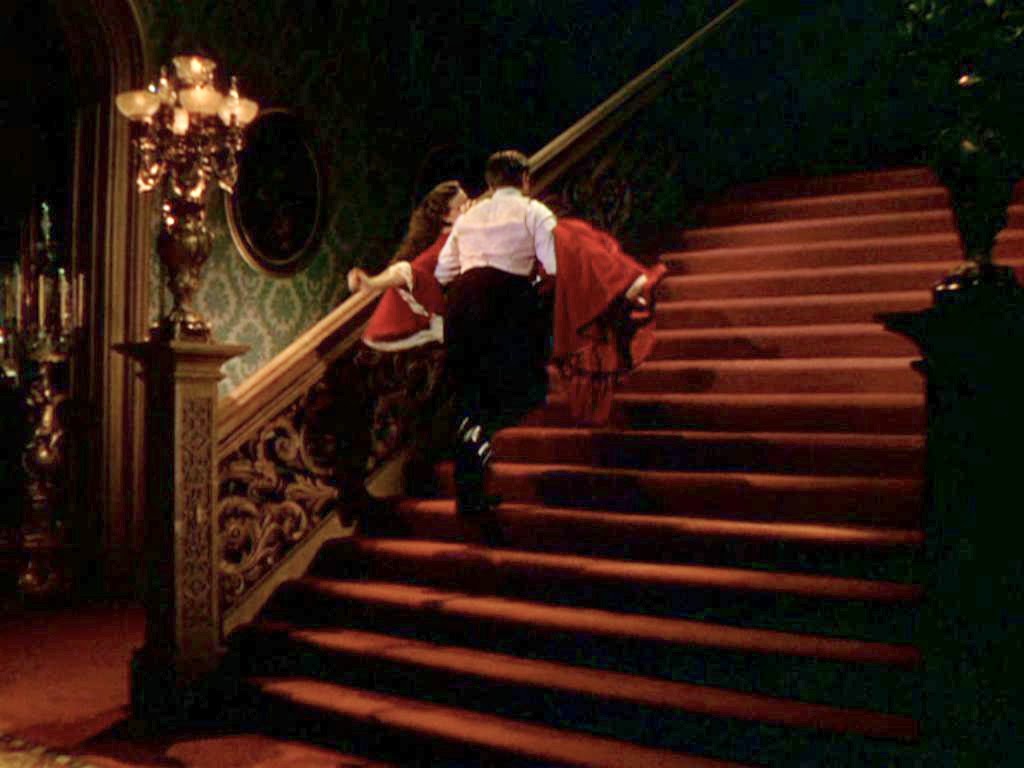 This scene is one of the most powerful and memorable ones in Gone with the Wind and sets the tone of the conflict that will define Scarlett and Rhett’s marriage for the rest of the movie. In spite of how good it is, it’s gotten a lot of flack, and for good reason; it’s the scene right before Rhett rapes Scarlett.

A lot of people have tried to argue that this scene isn’t marital rape, that it was just rough sex or hate sex. To them, the smoking gun is the scene that plays right after this one, in which Scarlett can be seen waking up and smiling. Clearly, she couldn’t have been raped because what woman would react this way if she had been?

Okay, so let’s address that second scene. Yes, it’s true–after the grand staircase scene, Scarlett isn’t crying her eyes out or filled with burning hatred for Rhett. She smiles like the cat who just swallowed the canary. But if you’re at all familiar with romantic fiction, you will recognize that the scene of Scarlett smiling was Gone with the Wind trying to confuse audiences about what had happened the night before, by referencing an old trope that thankfully no longer exists.

What was this trope? The “ravishing” love scene. This trope usually plays out when the two love interests, who have explosive sexual chemistry right from the get go, keep putting off sex because they initially can’t stand each other, or the woman plays hard to get (either because she doesn’t want to come across as desperate, or she is acting demure). After putting off sex for so long, sexual tensions between the two finally boil over, and the male love interest finally makes the first move, but in an aggressive manner. He might do it by suddenly grabbing and kissing the woman while her guard is down, causing her to resist before finally caving in and reciprocating with a passionate kiss. (Some famous examples: Rocky and Adrian in Rocky; Deckard and Rachael in Blade Runner; Terry and Edie in On the Waterfront.)

On the surface, the ravishing trope looks like the man is forcing himself on the woman, but it’s always made clear that the desire for sex between the two characters is mutual; it’s just that they’re both play acting a sex fantasy in which the man “passionately” takes the initiative while the woman initially resists. Gone with the Wind tried to be slick and downplay Scarlett’s rape by throwing in the morning after scene to confuse the audiences into thinking that she wasn’t really raped but “ravished.” (In other words, she was only pretending to not want sex so Rhett could take her in a fit of passion.)

But watch the grand staircase scene in its entirety without the morning after scene and there’s absolutely nothing about it that would suggest that what happened was innocent. First of all, there was never any real love or attraction between the two, not even in an “opposites attract” vein. In fact, the entire reason why the scene happens in the first place is that Rhett discovers, much to his rage, that Scarlett loves Ashley. So, the argument doesn’t wash that what happens in this scene is hate or rough sex between a feuding couple who secretly have the hots for each other.

Secondly, Scarlett isn’t fighting off Rhett because she’s playing hard to get, acting demure or covering up her feelings of sexual attraction by pretending to hate him. Sex is not even in the equation. She is trying to escape Rhett because he’s stinking drunk and he keeps threatening her physically. Not only does he rant about wanting to tear her to pieces, he puts his hands on her head as if he’s ready to wring her neck. You can see in the screenshot below how frightened she is and why later she keeps wanting to leave; he is two seconds away from slamming her head to the table, punching her or worse.

Even if you could say for the sake of argument that sex was in the picture, Scarlett wouldn’t have been holding out because she really wanted to have sex with Rhett but was only pretending not to. She would’ve been holding out because of her love of Ashley Wilkes. Again, that is a huge part of why this incident happens is in the first place. Rhett is not only enraged that Scarlett is madly in love with Ashley, he is irate that she is deliberately withholding sex from him because of her love for another man.

On top of all of these indicators that Scarlett was raped, the movie itself indirectly explains Rhett’s motivations for raping her. First, he does it because it frustrates him that he can’t physically crush the thought of Ashley Wilkes out of Scarlett’s mind. Since he can’t do that, the next best thing is to screw it out of her. The logic is that he’ll be so good in bed, she’ll instantly forget about Ashley.

Secondly, Rhett rapes Scarlett to punish her. He sees her holding a torch for Ashley as a form of cheating and cuckolding, so he feels betrayed and humiliated. To make matters worse, it’s her love for Ashley that is the reason why she’s holding out on him. Scarlett is an extremely prideful woman who’s always held the cards in any relationship, and nothing would be more humiliating–and punitive–than to force someone like her to finally submit to a man, not just emotionally but sexually.

The third reason Rhett rapes Scarlett is to reestablish who really owns her. Because Ashley has such a hold on Scarlett mentally and emotionally, Rhett sees him as encroaching on his possession of Scarlett, as in, “Ashley not only has her heart, he has her mind, too; he as good as owns her.” Rhett’s raping of Scarlett is a reminder that Ashley can occupy her mentally and emotionally all he wants, but as her husband, only he and he alone can take her, body and soul, even against her will.

The last reason Rhett rapes Scarlett is to heal his male ego, which was bruised when it learned that this entire time, she had never wanted him but another man–and a genteel, quiet man at that. The logic behind the rape is, “Well, maybe Ashley has won her over with his personality, but that’s because she is forgetting what a real man is like. A real man isn’t all fee-fees and intellect; he is a man with a dick who knows how to use it. I am a real man compared to Ashley, and I will show her what a real man can do.”

In the face of everything I said, I am sure there are bound to be people to argue, “You’re wrong. This is all interpretation, spin. You’re simply reading into the scene too much. It was rough sex no matter what you say.”

Fair enough. So how about this then? The grand staircase scene was directly inspired by Margaret Mitchell’s own attempted rape at the hands of her husband, Red Upshaw, who was the inspiration for Rhett Butler. The attack was so brutal that she spent every year up until his death sleeping with a loaded pistol on her nightstand.

Why the Morning After Scene?

Taking everything that I’ve said so far, there’s no question that the grand staircase is what it is, a prelude to the marital rape of Scarlett O’Hara. But now this raises another question. If Gone with the Wind had no qualms showing this event, why downplay it in the next scene? You might think it was because of the Hays Code or the morality of the times. However, I have a sneaking suspicion that either the screenwriters or the studio decided to downplay the rape for reasons having nothing to do with morality or offending 1930s sensibilities.

Because the movie spent so much time building Scarlett up as a narcissistic schemer and gold digger, there’s this perception that her ill-fated marriage to Rhett was one-sided. Scarlett is seen as this scheming, gold digging, cock teasing bitch and Rhett the stand up guy who was lured into her snare. But the reality is that they were both pretty much a couple of scheming, opportunistic dirt bags who had contributed to the toxicity of their marriage in equal amounts, especially after the death of their daughter. It’s their similarities in personality that is the reason why the marriage became a disaster in the first place. They were too much alike.

In spite of both Rhett and Scarlett being equally to blame for their marriage, it seems as if the screenwriters or someone at the studio decided to be Team Rhett and prop him up as the better of the two. The first reason, I suspect, is that they needed him to be the hero of the movie who finally tells Scarlett off and puts her in her place. Another reason is that Clark Gable was one of Hollywood’s biggest romantic leads, and the studios recognized that female audiences would be flocking in droves to the movie to claim Rhett Butler as the man of their dreams.

Had the rape played out the next morning with Scarlett emotionally distraught, this would’ve confirmed in no uncertain terms that she had been raped. That would’ve been bad from both a storytelling and commercial standpoint. Not only would Rhett have become completely irredeemable, this act would’ve alienated female audience members and made his walking out on Scarlett far less satisfying.

There was an additional bonus to showing Scarlett happy the morning after. It was to further capitalize on Gable’s sex appeal by propping up Rhett as stud. This is one of the reasons why Scarlett is smiling coyly. The smile isn’t just saying, “Ooh wee! I had a great time last night!” It was also a coy telegraphing of Rhett’s virility, to let the female audiences know that not only was he tall, dark and handsome but a beast in bed.

People can make a case that we shouldn’t condemn Gone with the Wind for its obvious flaws when it comes to social issues like slavery and its romanticism of the antebellum South. They cannot, for the love of Mike, argue that the grand staircase scene wasn’t marital rape and that everyone should shut up about it. Scarlett was indeed raped. Since she was raped, people have the right to complain about the movie’s social irresponsible message that a woman can be raped and enjoy it.

22 thoughts on “Yes, that Staircase Scene in Gone with the Wind (1939) was Marital Rape”

Films, Deconstructed is a blog dedicated to looking at films in a new way.